Well, my two other most favorite bands are celebrating anniversaries this year, so let’s give them some love, too.

U2 just celebrated 40 years as a band. 40 years! Not many bands can claim this milestone.

I was late to the U2 game. I remember hearing their early hits on the Top 40 countdown, but the first album I bought was Achtung Baby in 1991. So if I had to pick a favorite album, I would pick this one. Because it’s the one that made me fall head over heels. So many of these lyrics are imprinted on my heart.

“You gave me nothing; now it’s all I got”

“Love is clockworks and cold steel, fingers too numb to feel”

“If you want to kiss the sky, better learn how to kneel (on your kneels, boy!)”

U2 is an inspiration not only because they are incredibly gifted musicians and perform stunningly good live shows, but also because of their politics (which I happen to agree with). Some of their most popular songs are about injustice, political movements, war against others, war against ourselves. Watch them take on Trump recently.

I first saw them in concert in 1997, right before my 22nd birthday. Two friends and I drove six hours to see them. It was the Pop Mart tour, so I remember the wild graphics and stage setup. I also remember that we were walking around when they started playing, so we freaked and my friends, two tall men, proceeded up a down escalator. I barely made it; they had to yank me up the last few steps. 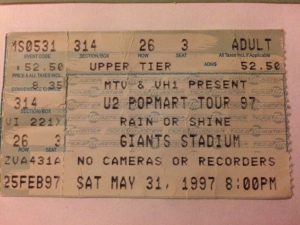 The next time I saw them was in Boston in 2001. They played four nights and I attended two of them. They produced a concert film of the shows, which is awesome. Boston loves U2!

2005 is the year I set my credit card on fire for the boys…they played in Boston for two nights in October, of which I attended one. I remember the seats were one of the best I’d ever had at a concert.

…Until December, when they returned for two nights. I attended both. This is where my memory fails me: I remember meeting a guy at a subway stop and buying a ticket from him for one of the nights. When he had bought it, he thought he was buying two tickets because the price was so steep. So he decided to sell it. I remember being grateful to him because he was selling the ticket for less than he paid. It was a super special ticket that allowed me to go to an exclusive bar at the venue before the show and I received a leather folder embossed with the U2 tour logo.

Whaaaat! Did I really pay that much? I doubt it, but I’ll never know. But I do know that I had the time of my life at the concert.

It was also in 2005 that I attempted to give U2 a letter. I had read that they were staying at the Ritz. I wrote a heartfelt note thanking them for their music, being an inspiration, etc. etc. With note in hand, I, along with a work friend, walked into the Ritz’s lobby and asked the person at reception if U2 was staying there. The response was, “I can’t confirm that.”

OK. So then my friend and I approached the doorman. My friend was cute so we chatted him up. He didn’t confirm or deny that they were staying there either. But he ended up taking the note and said he would try to get it to them. I’m not hopeful that they received it, but I’m happy that I at least attempted to thank them.

I missed the band’s next visit in 2009 because they played at a stadium outside of Boston and I didn’t have a car or any super fan friends to go with.

Therefore, I went 10 long years without seeing U2. I saw them in Boston last fall. What I love about their concerts is that they always play a perfect mix of new and old songs. The magic in the air at their shows is incredible. There is nothing like belting out the lyrics to “Bloody Sunday” or “Pride” along with 19,000 other people.

U2 is going on tour next year when they release a new album. And I’ll be there.

2 thoughts on “October and the Trees Are Stripped Bare”