I finally made it to Plymouth Rock! Checked #29 off the birthday list.

This is the rock. 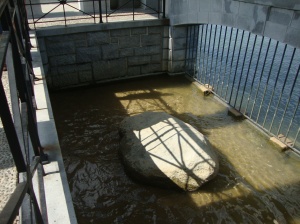 This is the monument built over the rock. 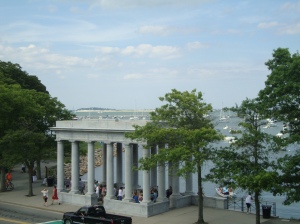 My tour guide was Deb, who lives in Plymouth. After checking out the rock, we saw lots of statues…Governor William Bradford; a Pilgrim maiden; Massasoit, leader of the Wampanoag. I love historical statues.

We also saw the National Monument to the Forefathers, which is in a large, random open space a few minutes from downtown.

We had a relaxing lunch on a restaurant deck overlooking Plymouth Harbor. I tried a local brew, Mayflower IPA. After lunch, we walked to the oldest church in continuous operation in the United States and rambled around its graveyard.

Deb, I’ll be back to visit Plimoth Plantation and the Mayflower II. And the Mayflower brewery. And the grist mill. And the Pilgrim Hall Museum! If you’re a history buff, there’s a lot going on in Plymouth…

One thought on “Plymouth Rock”