Some friends and I went to the Chocolate Bar at the Langham Hotel a couple of weeks ago.

I’ve kept my eye on it for years, feeling unsure about spending $30, $35 on eating a bunch of chocolate. The price is now up to $42, so I decided that this would be the year I tried it.

After we sat down, we noted that it felt like we were on vacation because (a) we were being totally indulgent by eating a boatload of desserts and (b) we were sitting in a hotel restaurant in an area of town that we usually don’t visit.

The serving sizes of the desserts were not very big, but everything was RICH, so we filled up faster than I expected. I tried: white chocolate cheesecake, a bacon banana tart, chocolate-dipped fruit, various chocolate mousses, S’mores, chocolate honey madeleines, a dark chocolate Rice Krispy treat…just to name a few. 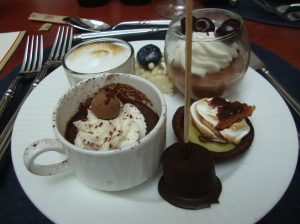 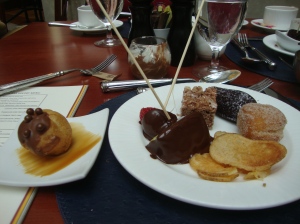 Some kind of genius decided it would be a good idea to offer salty items to offset all of the sweetness. We took much-needed “salt breaks” and ate chips and popcorn.

I walked into the Langham thinking that this would be a “once-in-a-lifetime” outing. But I can actually see myself returning someday…

After parting ways with my comrades, I met up with another comrade to visit the Spellman Museum of Stamps and Postal History. One of two philatelic museums in the United States, it is located on a small college campus in what seems to be a former elementary school building. 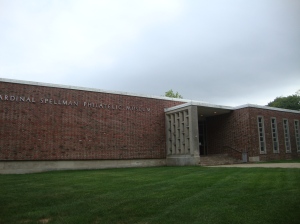 I have a thing for stamps, which probably stems from a longtime love of receiving and sending mail. I also consider stamps to be tiny pieces of artwork.

We had the museum to ourselves, which was fun. Exhibits we saw included: one about sending mail during the World Wars, one about mail being delivered by Zeppelins (news to me), and a collection of stamps featuring the American space program. Also on display were portions of the stamp collections of Theodore Steinway (of the piano family) and Franklin Delano Roosevelt. 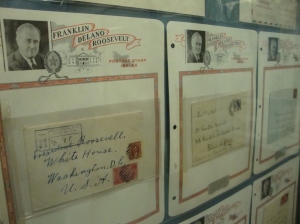 I really enjoyed viewing a collection of small antique metal and leather stamp cases. The museum was closing as we were strolling around the shop, so we feverishly looked through baskets of stamps for sale. I bought a few sheets of stamps featuring the Queen Mum and Queen Elizabeth.

I may have caught the philatelic bug…