I indulged in my bi-/tri-annual three-course meal a few nights ago. My friends and I had dinner at a subterranean Italian restaurant that was so tiny it was almost comical. I lost count of the number of times the waitstaff bumped into my girlfriend as they squeezed by our table.

I chose a lightly breaded piece of buffalo mozzarella with greens for my first course. My second course was a scallop ravioli thing…basically a layer of thin pasta below and on top of scallops, arugula, and leeks. My friends ordered beef tenderloin with risotto and chicken parmigiana.

Dessert was panna cotta. I hadn’t been a huge panna cotta fan until I shared a positively dreamy sample a few weeks ago. This one was nice but not as dreamy.

This morning, I made a donut pilgrimage. I have ridden by Twin Donuts at least 100 times on the bus, and have always been intrigued by its vintage signage: 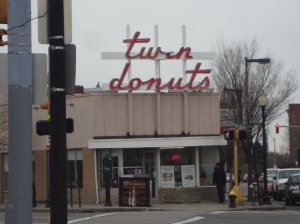 I decided today would be the day I tried Twin Donuts. I had read that many of the donuts sell out by 9:00 am. So I rolled out of bed and onto the bus around 8:30. I arrived a few minutes before 9:00 and, sure enough, a few kinds were already sold out.

The place has a nice no-frills townie vibe to it. I ordered a medium coffee, a “honey dip” donut (what I refer to as a glazed ring), and a sugar cruller. I don’t think I’ve ever eaten two donuts in one sitting, but what the hell. I’m heading to England tomorrow!

I can’t remember the last time I ate a donut. I think it’s because I prefer salty breakfast foods. But I have a soft spot in my heart for this confection. I dealt with many a donut during my six years as a Wegmans grocery-store bakery clerk.

I always felt an inexplicable satisfaction working with the donuts. I mainly worked at night, which meant consolidation of the donuts throughout the shift. There were usually two full cases of donuts when I arrived, and only a few trays left by the time we closed up shop. I reckon that I’ve spent the equivalent of weeks of my life washing donut trays.

One of the great mysteries of my life in New England is the absence of my favorite donut: the white creme donut. Maybe when the new Wegmans opens 5 miles from my house next month, I will put this humble request in its suggestion box.