I spent four nights in Cable Beach, a few miles west of downtown Nassau. I rented a little bungalow: 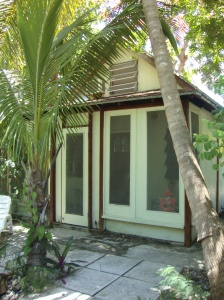 The bungalow was rustic, but I had access to a private deck right on the ocean: 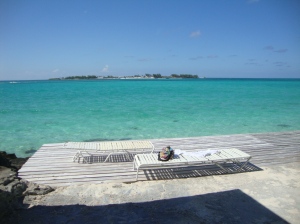 The water was absolutely mesmerizing. I laid out the first day I was there and subsequently learned a lesson: do not lay out the first day you are visiting a tropical island. Having not been exposed to the sun for months, my skin naturally burned in places that I naturally missed when applying sunscreen. So I dealt with burned body parts for the entire trip. All things considered, it was a small price to pay. 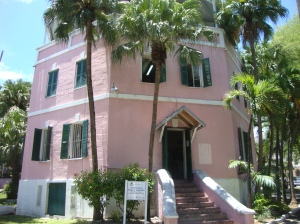 I read in a guidebook that I could pay a nominal fee for Internet access at the library downtown. I forgot to write down when my return flight was, so I really needed to get online. I went to the library on my birthday and used the computer for 30 minutes.

The library building, formerly a prison,  is an octagonal shape. I wish I could have taken photos, but there was a large sign saying that photography was prohibited. It was the smallest, cutest little library with impossibly narrow aisles and shelves filled with well–worn mass market paperbacks. Decades’ worth of yellowed newspapers bundled with rope were stacked on top of all the shelves. In every section there was a lone office chair, waiting for someone to sit down and read for a while. Loved. it.

Not surprisingly, alcohol was involved in two other highlights:

I came across a brewpub that had only been open eight weeks. I took a tour of the brewery, which was given by the co-owner. She and her brother are native Bahamians who enjoyed homebrewing. A few years ago, they decided to open a craft brewery. Funnily enough, before they got their brewery up and running, they contract brewed at a brewery an hour north of where I live! It was awesome to see a brewery in its infant stage. 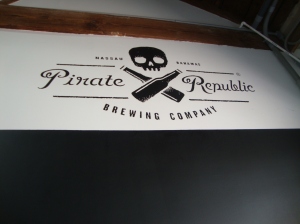 I was interested in taking a tour given by a local. I had read positive reviews of Islandz Tours, so I booked the Rum-Runner’s Passage Tour. Jason, the tour guide, was awesome, as were the two American couples on my tour. They were college friends who had young children, and they were ready to drink! I did manage to learn a little about rum along the way and had some fun drinks. We stopped at artist Antonius Robert‘s gallery and had a lovely chat wit him after eating some conch fritters and rum cakes. We also walked through a posh five-star resort called Graycliff and popped in at its cigar factory and chocolate shop. We ended up at John Watling’s Distillery, which was started by the Bacardi family. Suffice it to say that I have a new appreciation for rum.

Last but not least, I have to mention my trip to the Atlantis resort. A bunch of friends chipped in money so I could get a massage and nice dinner on my birthday. It took me 25 minutes to walk to the spa from where the ferry boats drop off people. I was late for my appointment and stressed out. The spa manager took pity on me and gave me the full time for the appointment.

After the massage, I walked around the grounds a bit before having dinner at an Italian restaurant. It was a quiet night at the restaurant, so my waiter came to chat with me once in a while. I mentioned that it was my birthday, and he surprised with me a dessert and “Happy Birthday” serenade from about 10 waiters. The dessert even had a candle.

The Bahamians are really friendly and I enjoyed talking with everyone I met. I would return in a heartbeat. I really need to start buying lottery tickets…